YZF R15 V 3.0 would be the top model motorcycle of Yamaha which is going to launch in Bangladesh soon enough. After Aprilia, R15 V2.0 is the most expensive motorcycle available in the country as well till now where the price of the 3rd version of it is yet to be disclosed. This is also the dream bike of the young generations of the country but most of them can not even afford the second edition of it due to its high price tag. Yamaha launched R15 first in Bangladesh in 2008 which was version one. Just a couple of years ago, the second edition of YZF R15 was launched. And now, peoples of Bangladesh are waiting for the 3rd version. 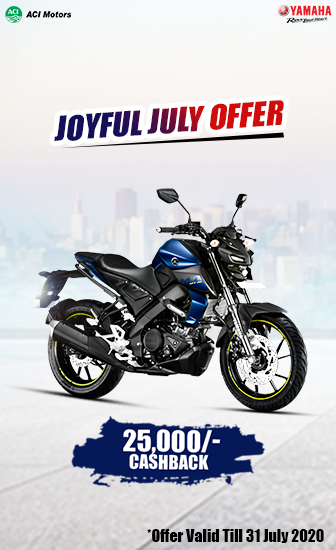 R15 V3.0 would be one of the best sports bikes in Bangladesh which will be introduced by Yamaha within few months. Due to cc limits by BRTA, Yamaha can not launch more than 155 cc bikes in Bangladesh where in India there are big configuration bikes are available. Now, Yamaha is going to launch the 3rd version of YZF R15 recently in Bangladesh though the release date is yet to be declared.

However, excluding R15 version 1.0 or R15 Version 2.0, there is one more model of R15 available in Bangladesh named Yamaha R15 MotoGP Edition.

Design & looks: YZF R15 Version 3.0 would be considered as the best-designed motorcycle in Bangladesh though it is yet to be revealed. Each and everything of this beast is completely gorgeous. With gorgeous fairing on both sides of the bike along with two best quality headlights. Besides, it’s seating position consists of two parts where the pillion part is quite higher than rider’s which makes it much sporty. Moreover, it’s looks and style are completely different than V2.0.

Engine performance: With 155.1 displacement, R15 Version 3.0 consists of four-stroke, four-valve, SOHC, liquid-cooled engine which can run with 19.04 bhp @ 10000 rpm maximum power along with 14.7 Nm @ 8500 rpm torque. The engine is very powerful than most of the available bikes in Bangladesh which can accelerate 0 – 60 km within 3 to 4 seconds. With a liquid cooling system, the engine functioning very well. The ignition type of this machine is TCI with a 6-speed gearbox.

Dimensions & seating position: The dimension of this speed machine is 1990 * 725 * 1135 mm which are length * width * height. The dimension of this bike is fully sporty where the seat height is 815 mm and the wheelbase is 1325 mm. The nice shaped fuel tank can contain 11 liters. Though the bike seems quite bigger it’s weight is almost 137 kg which is comparatively less than most 150 cc bikes. But due to amazing body kits, it can cross air nicely without any troubling at high speed as well. Due to the complete sports seating position, only one pillion can ride on it.

Suspension & Brakes: Like every feature, the suspensions of the speed monster are also great and comfortable. Upgrade telescopic USD suspension is used for the front part wheel and the mono-shock suspension is for rear-wheel which gives heavy comfort to the riders and pillion as well. However, with comfort, the company also used a better braking system in this bike which consists of two hydraulic disc brakes in front and rear and the disc brakes are so adjustable with the bike. Besides, the tires of the bike are almost perfect though, the rear tire is quite wider than last two Yamaha R15 versions.

Mileage: According to the company, the mileage of this bike is almost 40 km average which seems perfect for this very motorcycle. Though in the city, it is reduced but on the highway, it would run almost 45 km average if riders would maintain the speed limit. Due to the high price tag, it would be afforded by the top class people of Bangladesh, and in that case, they do not worry about its mileage.

Instrument Panel & Features: As one of the best motorcycle in Bangladesh, it consists of the complete digital instrument panel with the latest technology. The digital speedometer and tachometer, low fuel indicator, low oil indicator, and latest turn lamp. Besides, it has also LED headlight and upgraded battery.

Colors & Price: YZF R15 Version 3.0 consists of three colors that are available in Bangladesh named Racing Blue, Black, and Yellow. The price of the beast is 485,000/- so far without registration.

The most impressive things of YZF R15 Version 3.0 are it’s stylish looks and speed. It can fulfill the desire of young generations completely though, according to the news, it used to consume much fuel comparatively but considering it’s control, customer service and reliability, it can be tolerable. However, it’s price would be too high to afford by considering the current price of version 2.0. Though, it’s original price would not so much high but the tax in Bangladesh are too heavy. So, the government can reduce tax to make it affordable to the bike lovers in the country.