Dayang Runner Bullet is a product of Runner which is 100 cc motorcycle available in all over the Bangladesh right now. Runner Bullet consists of 100.54 cc engine displacement which has 4.8 kW max power. Runner Bullet 100 is one of the top entry level commuter in Bangladesh which can run with highest 100 km per hour.

The runner is regarded as one of the best motorcycle producing company in Bangladesh where there is a couple of more Bangladeshi motorcycle producing companies are in the market. But, Runner is most popular due to reliable products at a reasonable price. There are many models of bikes of the company that is available in the market where according to the company, they used to produce almost 500 motorcycles on a working day. And as per the statement, they used to produce 1,00,000 bikes every year. They have many different products which consist of sports, standard and scooter categories included. 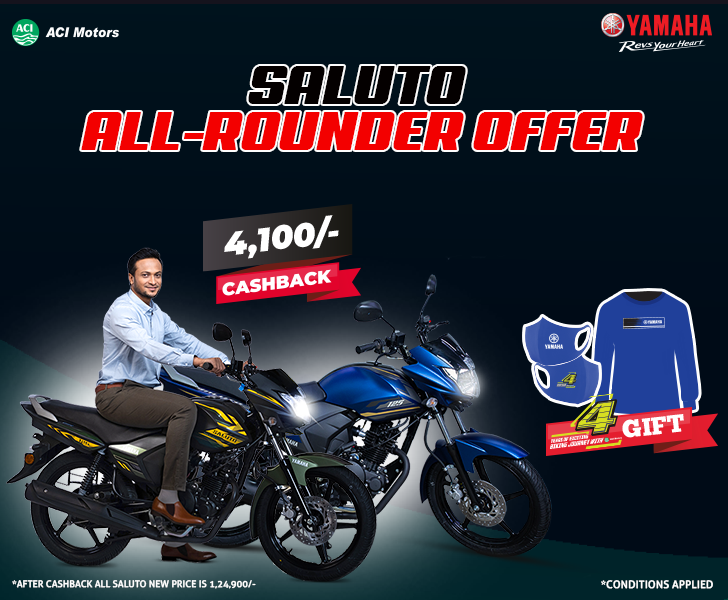 However, the price range of Runner bikes is heavy cheap and people would taste a powerful bike within a short budget. 100 to 110 cc bikes are the most popular segment of Runner company which demands is huge in Bangladesh nowadays. Due to the cheap price, in the village people used to buy their products. Dayang Runner Bullet 100 is one of the most popular 100 cc bike and due to standard design and powerful engine, young people which does not have much to buy a heavy bike, used to buy this.

According to some reliable news, Dayang Runner Bullet 100 cc basically 125 cc bikes but officially they have reduced the cc to make it more acceptable. So, the speed of the bike is comparatively better than available 100 cc bikes in Bangladesh. Due to heavy speed, better mileage, standard looks, and cheap price, it is placed as the top wanted a list of the young generation and middle-aged people. Let’s find out the whole specification of Runner Bullet 100 below.

Design & looks: The design of the bike Runner Bullet 100 is standard. It has a completely unique design fuel tank but there is not extended kit is added. The stylish but standard seating position has enough space for a comfortable ride. There is colored pillion grabrail is matching with the bike. However, the alloy wheels are black colored. Besides, under the fuel tank, the black colored toolbox is located where most of the Runner bikes have this thing. The headlamp is quad in style and power. Overall, the bike would be good looking at this budget.

Engine performance: The engine of Dayang Runner Bullet 100 is comparatively powerful than most of the same segment bikes. The claiming displacement of the bike is 100.54 cc which has 4.8 kW @ 7500 rpm max power and 7 Nm @ 5500 rpm max torque. Due to the powerful engines, the bike can run with 100 km per hour top speed reportedly. It has an air-cooled engine like rest standard bikes. However, the engine is compatible with petrol. Both, kick and electric starting systems are added to the bike. A DCDI ignition system is used where the spark plug is A7RTC.

Dimensions & seating position: The bike has a pretty long seating position where two pillions can ride. However, the kerb weight of the bike is 121.5 kg respectively which is pretty more than available 100 cc bikes. However, it can take almost 150 kg load at a time. The wheelbase is good at 1290 mm. The fuel tank has pretty enough space that can contain 14 liters. The dimension of the bike is 2060 mm length, 785 mm width and 1268 mm height.

Mileage: Though, Dayang Runner Bullet is a 100 cc bike and normally a 100 cc bike used to provide heavy handsome mileage. But due to a very powerful engine and heavy looks, it’s the mileage is a little poorer. According to the user’s opinion, it would provide more than 50 km mileage average. But, on the highway, the mileage will increase.

Instrument Panel & Features: Though most of the parts of Runner used to be imported from China they used latest quality and stylish instrument console in their every bike. So, Runner Bullet also has a stylish and digital instrument panel. There are digital speedometer, digital clock, gear display, fuel gauge noticed.

Colors & Price: Just three colors Red, Black and Blue of Dayang Runner Bullet 100 are available in Bangladesh where Blue color is the most popular. The current price of the bike is BDT 105,000 but there is an offer is available and so, customers can get it in BDT 105,000.

The looks of Dayang Runner Bullet 100 is so hot and which why it’s demand is good in rural side of the country. They would like to buy a nice looking bike within reasonable price and Runner Bullet has that kind of quality. Besides, it’s handling and control are also great. However, within the reasonable price, it has no renowned contenders in Bangladesh. Young people can have the taste of heavy speed by riding it and due to high weight, it can not vibrate during top speed. Resale value of the bike would not disappoint the customers.

Be the first to review “Dayang Runner Bullet 100” Cancel reply