Taro GP 1 is one of the most good looking sports bike which price in Bangladesh is 306K BDT. Taro is basically a Italian origin motorcycle brand. Those are manufacturing their motorcycle in Chine. Taro GP 1 is the most exclusive sports bike of them which 150cc launched in Bangladesh into the beginning of 2018. Taro GP 1 have a powerful engine of Lifan. Due to good looking, outstanding feature and better user experience it become so popular within a short time in Bangladesh.

Taro GP-1 Sport is an upcoming sports bike in Bangladesh which would bring a revolution in the sports category bike in the country. The bike is so amazing with completely unique in looks which has not any similar bikes here in the country. It can be compared with top cc sports bike like Ducati, Aprilia and so on considering the looks. The bike is a product of Italian brand Taro which is going to release in Bangladesh and so, it is oftenly called Taro Bangla as well. Though, it is a Italian brand but their products are not assembling there. But, instead of Italy their upcoming bike Taro GP-1 Sport is assembled in China and so, being an Italian brand, it would be considered a Chinese bike after all. But, it’s price would not be same as Chinese ordinary sports bikes which are available in Bangladesh already. According to the reports, it’s price range would be more or less than three lacs BDT in Bangladesh.

In Bangladesh, the usage of Chinese bikes are increase day by day and people would like to use sports bike rather than an ordinary standard bike. However, the price of the top rated Japanese and Indian brands sports bikes are still out of range and so, they have moved their attention to the highly designed Chinese bikes. In that case, considering the looks and heavy configuration, upcoming Taro GP-1 Sport would be a top rated product within budget it seems. Let’s see the complete specification review of the bike Taro GP-1 Sport below.

Design & looks: Taro GP-1 Sport is an amazing looking sports bike which has wide but sharp front end with dashing looking rear end position. The fuel tank design is completely mascular which has very sharp eye looking headlamp. The bike is full faired and it has wide tires. The silencer pipe is unique in designed which is also not so long. The rear seat is pretty higher and matching for sports bike. The bike seems strong in design which can impress anyone at the first sight.

Engine performance: Taro GP-1 Sport is a 150 cc sports bike which has actual 149.9 cc engine displacement. The compression ratio is also good. The engine of the bike consists of one cylinder, four stroke and chamshift overhead. Besides, it possesses water cooled engine which is suitable for such quality sports bike. Only electric starting system is added which can release 14.08 bhp@ 8500 rpm max power and 14 Nm torque. Due to powerful engine, the sound of the bike is completely different and attractive which is heavy actually. Now, if we consider the acceleration and the top speed of the bike, reportedly it’s top speed would be not less than 140 kmph.

Dimensions & seating position: Taro GP-1 Sport is a well measured bike which is 2050 mm long, 720 mm wide and 1155 mm high. Besides, it has good ground clearance and wheelbase is also impressive. But weight of the bike is little bit more which is 150 kg. Besides, it has 13.5 litres fuel tank capacity. The seating position is completely sporty but it is also comfortable. However, the sports bike is suitable for rider himself and it would be the same for Taro GP-1 Sport. But it can carry one pillion easily.

Suspension & Brakes: Taro GP-1 Sport has front positive shock absorber and rear it has mono shock suspension which is called single gas absorber. The suspensions are great and ensure proper comfort as well as speed. Besides, more impressing fact is, the bike has front dual hydraulic disc which is each 300 mm. The rear, it has also disc brake which is 240 mm.

Mileage: Taro GP-1 Sport is a complete sports bike and so, it’s mileage would not be much. Though, company claims that it’s average mileage would be 40 km but considering the engine power and design of the machine, it would not less than 35 km at all.

Instrument Panel & Features: Taro GP-1 Sport has full update instrument panel which consists of digital speedometer, analog tachometer, digital clock, digital gear display, fuel gauge and so, on. However, it has also trun lamp and headlamp and tail lamp both are LED. 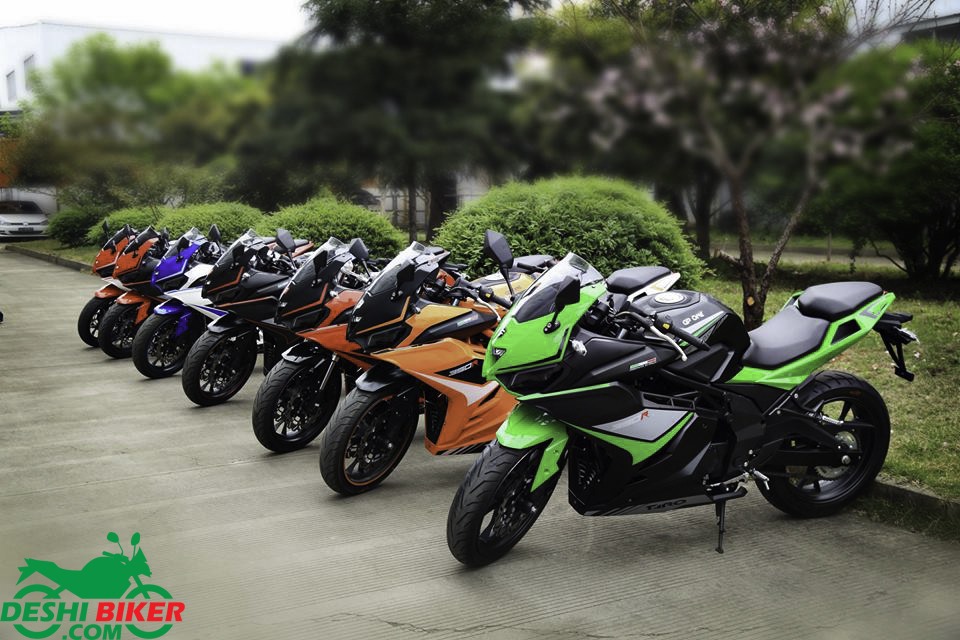 Colors & Price: Taro GP-1 Sport would be available in Bangladesh with seven different colors according to the company which are Red, Black, Blue, Orange, Green, White. The price of the machine is 306,000/- BDT.

Be the first to review “Taro GP-1” Cancel reply