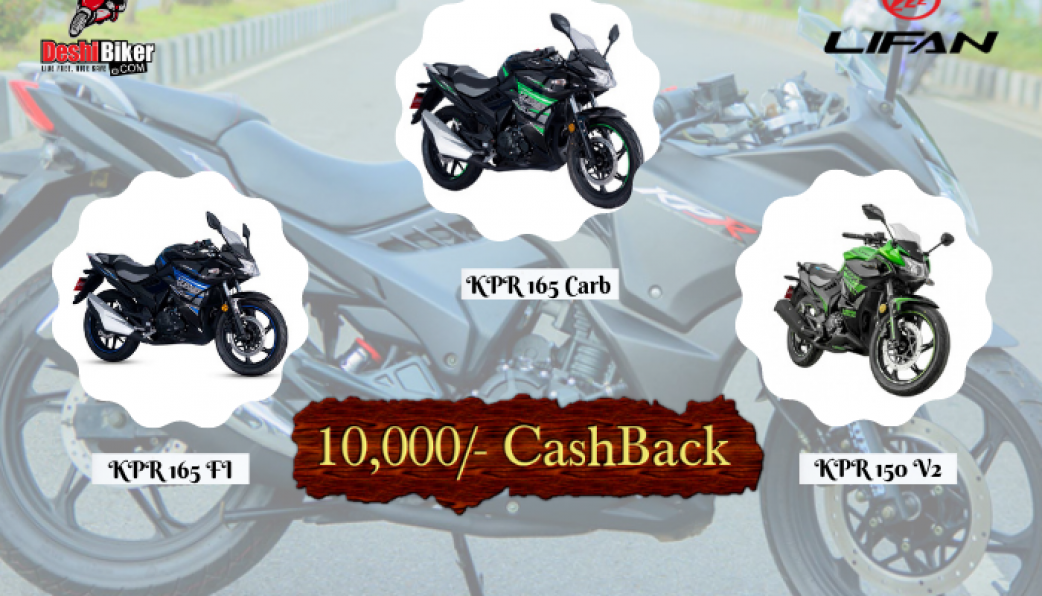 Lifan is one of the well known and trustable Chinese motorcycle brand. Many Chinese and European brands sources their engine and body frame from Lifan. Lifan started their journey in Bangladesh with Rasel Industries Limited. They are the sole distributor of Lifan Motorcycles in Bangladesh. When they launched the first Lifan KPR 150 in Bangladesh, it got a huge response from the bikers. It was one of the good looking full-faired sports bike with a getable price range.

After a huge response with KPR 150, They brought KPR 165 carburetor and previous year they launched KPR 165 FI edition. These three products are popular for their look, performance and also within budget. Recently Lifan offering cashback on these three motorcycles. Let’s see what the current price of these three bikes after offer.

Lifan have two variant of KPR 165. Both bikes equipped with a a liquid-cooled, 4 stroke ,single cylinder, 165cc vertical engine that can produce 16.8 bhp maximum power at 8000 rpm and 17 Nm of torque at 6500 rpm. But we get more throttle response on EFI version than the carburetor. Apart from that, the handlebar, design and looks, headlight settings, tyre sections are remain the same. In the term of design and engine performance, this motorcycle can easily compared with any sports bike available in Bangladesh. But these bikes price are comparatively reasonable according to performance. That’s why biker’s have a huge interest in these two wheelers.

Recently Rasel Industries Ltd also launched three new motorcycles in Bangladeshi market. One is off-road, one is cruiser and another one is touring. But the touring one is called KPT 150. This motorcycle was previously available in Bangladesh. But recently it launched with a dual-channel ABS braking system.