Yamaha FZs FI V2.0 is a premium segmented sports commuter which consisted of single disc brake. But, Yamaha is going to launch in Bangladesh Yamaha FZs FI V2.0 Dual Disc. Today we Team Deshi Biker are going to present the first impression review of the bike. Let’s see which new features are added to the latest version of the bike 2018.

Here we come to the braking details at first. The bike is fully updated considering the braking system. There are disc brakes added into the front and rear portion which is completely new in same segment bikes in Yamaha. Front disc is pretty bigger which is 282 mm and rear disc is 220 mm. Due to the front and rear disc brake, the controlling of Yamaha FZs FI is much matured now. There are some positive sides of it as well. Among them the major facts are,

2018 version of Yamaha FZs FI V2.0 is used completely new design alloy wheels which consists of ten spoket, the more attractive than before as well as more strong. The rear view mirror is also changed than earlier which are more effective now. And a new feature is added which is side reflector. Due to the side reflector, the bike can be noticed easily.

The bike is going to available in Bangladesh with only one color which is Armada Blue and along with it the most stylish body graphics are added as well. In near future the more colors would be added. The official price of the bike is slightly more than older version of Yamaha FZs FI. The current price of the bike is BDT 2,65,000 only.

There are not much to say about the design of the bike FZs FI. The design remains same as well as single disc brake version. It has muscular fuel tank along with extended kit which makes it more attractive. There is AHO or Automatic Headlight On feature added and the headlamp of the bike is 12 volt which is very effective in night too.

Now, comes to the engine details of the bike Yamaha FZs FI V2.0. The bike consists of air cooled, one cylinder and two valve engine which is also SOHC or Single OverHead Cam. The max power of the 150 cc bike is 13.1 Bhp in 8000 rpm and max torque is 12.8 Nm in 6000 rpm. Besides, the bike is BS4 approved. Yamaha has used Blue Core technology into their product FZs FI V2.0. The usefulness of the Blue Core technology are it uses all generated power from the engine completely, it cools the engine and helps to provide better mileage. 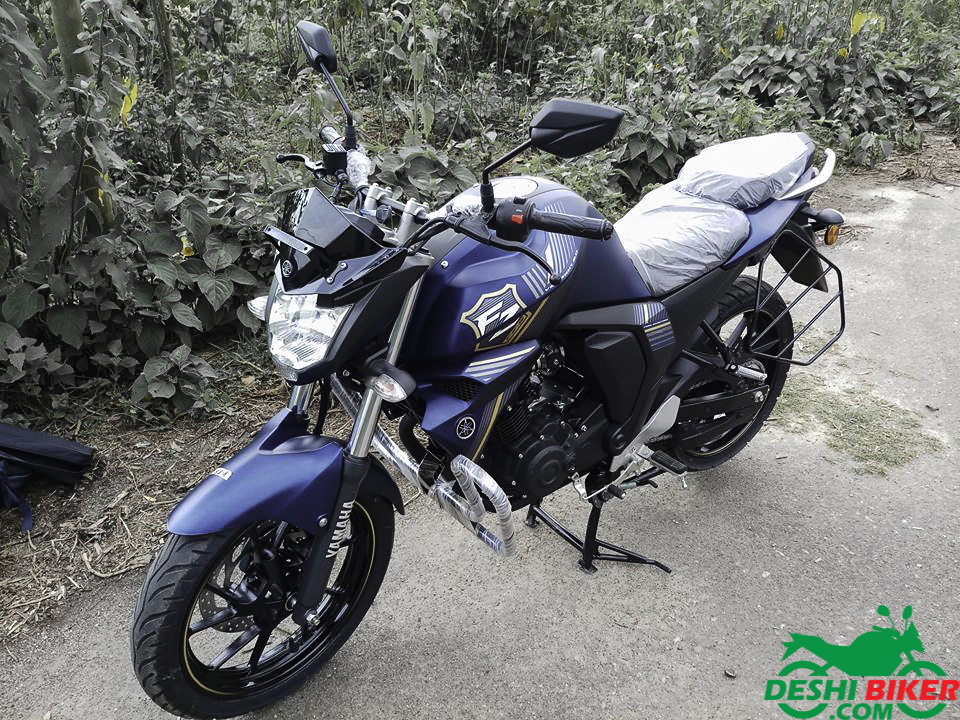 The bike has wet, multiple – disc clutch and five speed constant mesh gearbox added which used to be seen in the same segment bikes. The fuel tank can contains 12 litres of fuel and the kerb weight of the bike is 133 kg. The bike also has splitted seating position which is much sporty looking as well as skid resistance. Besides, it ensures proper comfort during long ride. It has also attractive grab rail.

The bike has rich handlebar which is much sporty looking but during long ride, it is also very comfortable. Though, most of the credit goes to the suspensions of the bike. It has front telescopic fork and rear monocross swingarm suspensions added. The front tyre of the bike is 100 section and rear tyre is 140 section which are also tubeless.

It was the first impression review of the bike. We will try to present the Test Ride Review of it. That’s all for today. Always wear helmet, glove and shoe while riding bikes.