KTM is one of the well-known and popular motorcycle brand in the world. This brand has already created a huge marketplace with its amazing motorcycles. They changed the theory of motorcycle design and color scheme. Black and Orange became the symbol of KTM motorcycles and motorcycle enthusiasts do like the color concept of KTM. They have entry-level to higher segment sports motorcycle in their Arsenal.

KTM was established in 1934 in Austria and their headquarter is at Mattighofen, Upper Austria. But in 1992, this company got separated from its parent company KTM AG. Now the owners of this company are Pierer Mobility AG and Indian manufacturer Bajaj Auto. To reduce the price range for the Asia region, Bajaj Auto already started to manufacture KTM motorcycles in India. A couple of months ago, Runner Automobiles Ltd launched three models of KTM motorcycles in Bangladesh and became the sole distributor.

Runner officially launched two versions of KTM Duke in Bangladesh. One is the Indian version and another one is the European version. Though these bikes have the same engine displacement and powertrain, but there are lots of changes between them in the terms of features and outlook. They also have a difference in the price tag. let’s discuss why the European edition costs more than the Indian one.

KTM Duke 125 known as one of the best entry-level naked sports motorcycle not only in Asia but also in the Europe zone. There are two versions of KTM Duke 125 launched in Bangladesh by the sole distributor Runner Automobiles Ltd. If you look carefully you can see some differences in these two variations.

The European edition of KTM Duke 125 looks completely different in terms of design. The fuel tank and the front extension kit look more sculpted and edgy than the Indian version. The other major changes are its headlight unit and visible trellis frame. This headlight unit carries KTM’s signature look and equipped with LED lights with snake fang DRLs. It also has a TFT digital console which is similar to KTM Duke 250. It’s luminous and contains all the essential features. The other thing you will notice that the exhaust, it’s loud, sporty and looks premium. 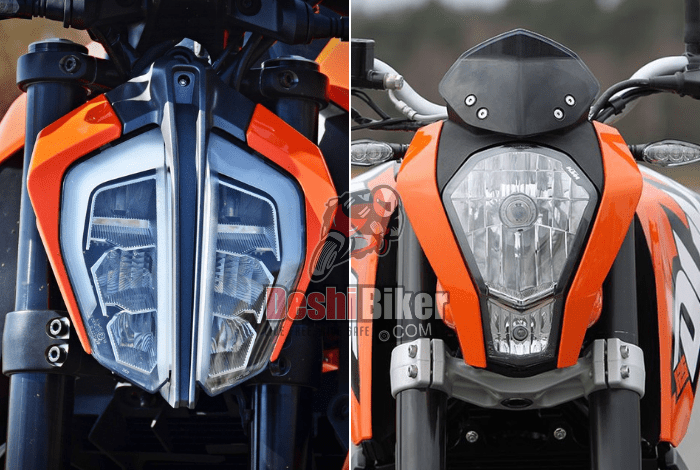 The Indian edition of KTM Duke does carry the same engine displacement and powertrain, but it looks different from the Europen edition. The fuel tank design looks standard but the extension kit not much sharp and edgy as the European one. But it gets orange-colored rim for an outstanding appearance. It equipped with an underbelly exhaust and a large engine cowl to make this beauty sporty. The headlight unit gets a regular halogen bulb and DRLs. And the last change of this version is the dashboard. Where the European edition gets a TFT digital console, The Indian edition gets a regular digital dashboard. 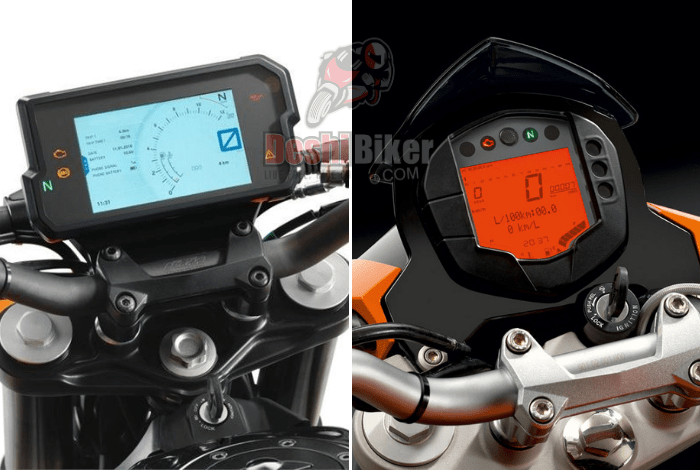