Taro GP 2 Predator is a 150 cc full faired sports bike which is going to available in Bangladesh real soon. The bike is assembled in China though the brand Taro is originated in Italy. Due to the Chinese assembled bike, it would be considered less reliable than Japanese assembled bike Yamaha Fazer FI V2.0. Fazer FI V2.0 is a semi faired bike which is not so sporty but best for long ride. It is a touring commuter in Bangladesh and highly demanded to the general people. Though, GP 2 Predator and Fazer FI V2.0 are from two different types of bikes but considering the price range, both are available in same budget. So, here we have come to talk about it and let’s see which will be more reliable and best bike in the budget.

# Looks: Taro GP 2 Predator consists of full sporty looking bike and more attractive than Fazer FI V2.0 in Bangladesh no offense. Somethings are common about the two bikes where both bikes have sporty and splitted seat though, the seat of GP 2 Predator is much more sporty and attractive. GP 2 has full aerodynamic features added with muscular body shape. It has very aggressive and sharp front end with dual pit headlamp. On the other side, Yamaha Fazer FI V2.0 is semi faired and less sporty looking bike. It is a touring commuter which seems simply incomparable in Bangladesh now. It was wide not sharp front end which has dual headlamp also. There are no engine guard attached to the bike where engine is fully naked. Considering the looks Taro GP 2 Predator is much more attractive than Fazer FI V2.0.

# Engine Performance: Engine is the main part in a bike. So, it should be reliable. If we consider the reliability between this two bikes Taro GP 2 and Fazer FI V2.0, we must keep ahead Yamaha Fazer FI. Because it is fully Japanese origin. The Japanese products are much more reliable than Indian and Chinese brands. Though, GP 2 Predation is installed Lifan engine with custom design. And Lifan engine is one of the top reliable in the World. But still, Yamaha brand product is much more reliable than Lifan engine. However, both are 150 cc bikes where GP 2 has 16 Bhp max power and 14.5 NM max torque. Where the max power of Fazer FI V2.0 is 12.9 Bhp and Max torque is 12.8 NM. GP 2 has six speed gearbox where Fazer FI V2.0 has five speed gearbox. No kick starting system are added into both bikes.

# Suspension & Brake: If we consider the braking system of the bikes Taro GP 2 Predator and Yamaha Fazer FI V2.0, we must say that GP 2 has best braking system between this two bikes. It has front dual hydraulic disc brakes which is 300 mm each. Besides, there is single disc brake in the rear wheel of the bike. On the other side, Fazer FI V2.0 has only front hydraulic disc attached. The disc is 267 mm. Rear brake is drum. The suspensions of both Taro GP 2 and Yamaha Fazer are very good. Fazer has front telescopic suspension and in rear monocross suspension is used. On the other side, GP 2 has front upside down suspension and rear monoshock suspension is used.

# Comfort & Control: Now, as the best touring bike in Bangladesh, Yamaha Fazer FI V2.0 is more comfortable than Taro GP 2 Predator. GP 2 is a sports bike and people would not ride the bike for long. He would feel back pain during long ride. Basically sports bikes are good for racing track and they are not for general road in the country. Besides, they are not for regular ride as well. On the other side, tour loving people can easily ride Fazer FI V2.0 without feeling any problems. Besides, it’s controlling is also satisfying. During great speed, the bike can be controlled easily. However, GP 2 has great braking system and hopefully the controlling of GP 2 would be good as well. Also both bikes has splitted seat but rear seat of GP 2 is much higher than Fazer. So, Fazer would be more comfortable than Taro GP 2 Predator.

# Fuel Consumption: Due to use fuel injection technology into Yamaha Fazer FI V2.0, the mileage of the bike is very good now. In the older version of Fazer, there are a bit mileage problem but in the latest addition, the mileage is increased. The reported mileage of the bike is 45 km average. On the other hand, due to fully sports segmented bike Taro GP 2 Predator would not provide satisfying mileage. As new bike, the reported average mileage would be 38 km. So, it seems that considering mileage Fazer will be a good choice. 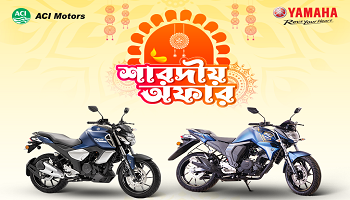 # Top Speed: Yamaha Fazer FI V2.0 would not for speed. The bike is a best touring category bike in Bangladesh. But still the top speed is almost good. Reportedly the bike Fazer FI would provide almost 118 kmph top speed and it’s quick acceleration is not good. But in the case of Taro GP 2, it’s top speed is very good. Reportedly the bike would cross 140 kmph easily with powerful engine. The quick acceleration of the bike is also very good.

In the above discussion, we presented the whole facts of the two comparable bikes. Now, the decision is yours to take. If you are a crazy fan of sports bike, then in the budget Taro GP 2 Predator is for you. Or if you want a reliable touring bike in the segment, Yamaha Fazer FI V2.0 will be best then.